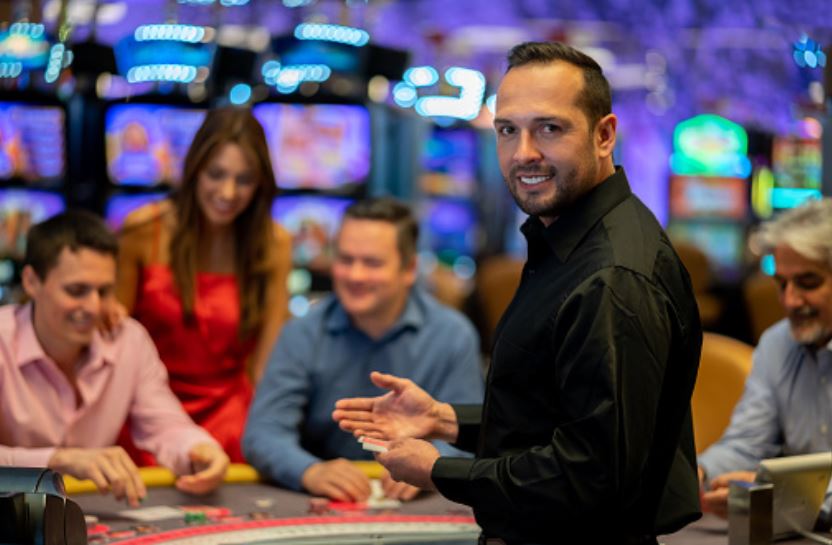 Some types of gambling games originated hundreds of years ago and are still in particular demand in land-based casinos. Realizing their continued relevance, developers have begun to introduce such games to online establishments as well. Now the players do not have to ask how to have fun at home. Just download the official website of your favorite casino and in remote mode, you can also successfully play your favorite game with a Live Dealer and there are great reviews on casino-howto of such games.

Roulette is one of the first gambling games to appear in casinos. It is impossible to find a casino that does not have a roulette table. The reason is simple – it is unofficially known as the queen of casino gambling. The playing field consists of two parts. The first is a spinning wheel with 37 sectors (the American version has 38 sectors), and the second is a field with the same number and colour of sectors. The sectors represent numbers from 0 to 36. They are coloured red and black. The exception is the number 0, which is green and is called zero. Bets can be placed on the number, even/odd, red/black, range. In addition, bets can be divided into internal, external and verbal bets. The croupier launches the ball into the moving part of the roulette wheel, which spins in the opposite direction to the main part. After making a few complete turns, the ball falls into one of the sectors of the roulette wheel.

Nowadays, there is an incredible variety of this game. For example, roulette with two, or three balls, a game without zeros. These variants can only be found in online casinos. In spite of this, the three classic variants are the most favourite among players:

The first two variants have exactly the same rules. The only reason they have different names is that the European game uses English. It is, as you understand, an international language that is understood by most players. However, the American version is somewhat different in its rules and even the playing field. It features two zeros – 0 and 00. In addition, as of 2016, there are also tables with three zeros. In American roulette, there may be three croupiers if the table is very busy. There are no verbal bets.

Craps is one of the table games in the Craps series. This game is most commonly found in land-based casinos of Las Vegas. Some online casino software developers have not missed the opportunity to attract craps fans to their screens. The first ones have developed craps rooms for their customers. In addition, thanks to the lack of sophisticated equipment, you can even play it at home in the company of your friends. The game involves up to 20 players and up to 4 dealers. The dealer is commonly referred to as the Shooter. The dealer rolls 1-5 hexes on the specially marked table. The table, in turn, has high sides. This is to keep the cubes from falling out of the field. The task of the players is to bet on the expected combination of dice and win.

The game includes two stages. The first is Come Out Roll and the second is Point Roll. Come Out Roll is the first move in the game. It is used to determine the number for the next Point Roll. If any number from 4 to 10 is rolled, the next phase begins. If 2, 3, 12 – Shooter loses. The right to roll the dice goes to another dealer. This situation is called craps for short. For Shooter the most ideal combination of numbers should be either 7 or 11. In this case, he wins and keeps rolling the dice. In the second step, the number 7 or Point should roll. In the first case, the shooter loses, and the right to roll goes to the other. In the second, the shooter wins and the game continues. Beginners may find it difficult to understand the rules of the game and all types of bets (there are an incredible number of them). However, they quickly come to understand them and the game becomes a lot more fun.

Blackjack is a table card game. It is so popular that it can be found everywhere – in offline casinos and halls with real casino croupiers online, table games sections with RNG, and it has been a part of some popular Hollywood movies. The game has been around since the 18th century, has had its ups and downs, and has reached a plateau in popularity with the advent of online casino games. It is loved for its simple rules and dynamic gameplay.

The game starts with the dealer dealing two cards each to the players and himself. The player has to collect 21 points or more than the dealer himself with fewer cards. However, there is one important restriction. The number of points can’t be more than 21. If this is the case, the player loses. The cards have fairly simple value values. Numbers are still numbers. Pictures have a price of 10 points, aces have 1 or 11 (depending on the situation).

Baccarat is a card game often found in online casinos. At the same time, it is also a newcomer to offline establishments. On the face of it, the game seems quite simple, but in reality, it is not. Baccarat is similar to Blackjack, in that a player who holds two or a maximum of three cards must collect 9 points. The difference in the value of the cards starts here. Cards with numbers 2-9 have a similar value. An Ace gives 1 point, a 10 and a picture gives 0 points. If the combination of cards exceeds 10 points, one ten is subtracted from the total value of the cards. For example, if the cards add up to 13 points then only 3 points are counted (13-10=3). 3 outcomes can be bet on in the game:

As the game has become more popular, many variations have appeared. For example, there are variants where the game involves a limited number of players or several packs of cards.

Poker is one of those games that is constantly being improved. Because of this, new varieties of poker are constantly being created. One of these is Casino Holdem. The game consists of several stages. First, the dealer and the player make a bet of 1 to 100. Player bets are called the ante. Then two cards are dealt with each participant in the game, and three cards are placed in the middle of the gaming table. These cards can be used by the participants to make combinations. The player’s task is to put together a combination of cards that is higher in value than the dealer’s. In the case of a draw, the bets are refunded.