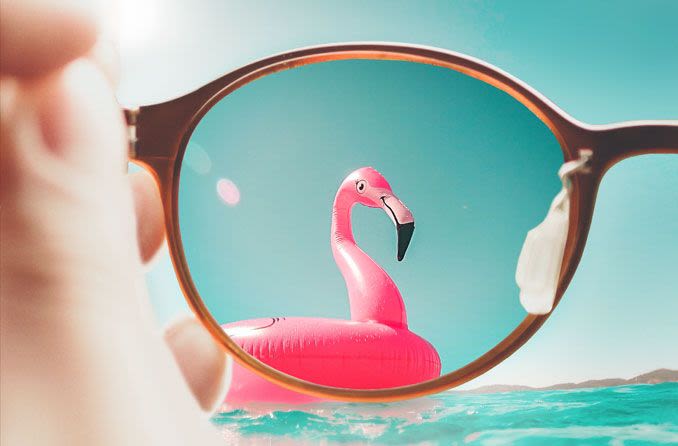 Polarization is when light strikes a surface. All the photons are vibrating in one direction instead of in random directions. The light travels from ‘pole to pole’ along that plane. This is what causes the glare off of shiny objects like Automobiles, chrome, and the shiny reflection off of the water. That’s what causes the mirror-like effect on top of the water that prevents you from seeing through the water’s surface. This glare distorts the color of objects and makes them harder to distinguish.

What does a polarized lens do?

Polarized lenses work by filtering the waves of light by absorbing some of the reflected glare while letting some of the other light waves to pass through them. One way to think of how a polarized lens would work is to think of the Polarized lens as a window blind. A window blind will block light that strikes it from certain angles while allowing light to pass through from other angles. A polarizing lens will work when it is positioned at a 90-degree angle to the source of the glare. Polarized sunglasses are designed to filter out horizontal light and the polarized lenses are mounted vertically in the frames and they must be carefully aligned so they will filter out the light waves.

The first polarized lenses were a piece of polarizing film sandwiched between two layers of flat glass. Because glass lenses are so heavy, thinner and lighter plastic and polycarbonate lenses have become so popular.

Early polarized sunglasses had problems with delaminating, which is the separation of the polarizing film from the glass or plastic lenses. The making of modern lenses has solved this problem, the polarizing film is suspended inside the mold and the plastic is melted and poured in. The plastic then hardens around the piece of suspended polarized film, creating a solid material, rather than a layered one. Polycarbonate lenses are injection molded, so they are made a little differently. The heat from the injection molding would destroy the polarizing film, so the polarizer film is applied to the front of the lens and covered with a scratch-resistant coating. Polycarbonate lenses are the lightest and thinnest polarized lenses available.

Who benefits from polarized sunglasses?

Polarized lenses work well for boaters, fishermen, skiers, golfers, bikers, and joggers, who require a clearer view and elimination of glare. These sunglasses when used for driving, can reduce the glare that comes off the car or the surface of a road. Polarized sunglasses can also be used indoors by light-sensitive people. While ordinary tinted lenses reduce brightness, only polarized lenses eliminate glare. While the first polarized sunglasses were used mainly by sportsmen, the general public has realized its many benefits, and now they have become so popular.