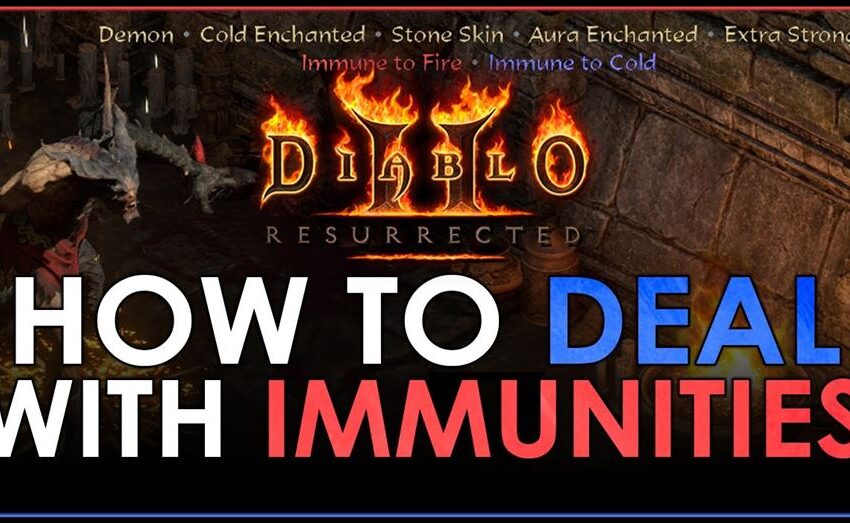 Affect their resistances in a variety of different ways: A monster that possesses immunity to an element has, in practice, resistance equal to or greater than 100% to that element. In addition to having the appropriate immunities bestowed upon them because of the creature type from which they originate, unique monsters also have three random modifiers that can

Contents hide
1 Managing Monster Immunities: Avoidance of Their Effects
2 Therefore, what are our choices?
3 Confronting the Immunities of Monsters and Overcoming Immunity
4 Items with a Lower Resistance
5 Conviction through the use of Infinity

Immunities have the potential to significantly impede the effectiveness of certain builds, specifically those whose damage is caused by one of the four primary elements (fire, cold, lightning, or poison).   When going up against cold immunes, for instance, a Blizzard Sorceress is almost completely ineffective.   It is possible for mercenaries to be of assistance; however, it takes an exceptionally well-equipped mercenary to take down certain Unique monsters and their minions on their own, and even then, this decreases the kill rate to the point where it is probably better off if you fight something else.

Other classes, such as those that deal physical or magical damage or builds with two effective means of dishing out damage (such as the Poison Necromancer or the Meteorb Sorceress), will find that they are hindered less frequently and less frequently than other classes; however, dual-immunes do exist, and while they are uncommon, they are not incredibly rare.

Therefore, what are our choices?

To begin, you always have the option to close out of the game and start it over again.   There are many areas that have a greater number of potential foes than will ever appear in a single game; typically, only three of the various types of enemies that could appear will do so.   This is a potential solution to the problem if there is only one problematic foe in the area and you have easy access to the location again.

On the other hand, there are situations in which there are sufficient numbers of different types of immune foes to prevent this possibility from occurring, or perhaps you are unable to easily revisit that location.   Therefore, there is yet another choice that is just as unappealing, and that is to steer clear of the adversaries in question.

Confronting the Immunities of Monsters and Overcoming Immunity

Neither of these is a particularly elegant solution, but there are times when buying Xbox D2R ladder items resurrected Diablo 2 resurrected Runewords for sale is more prudent to exercise discretion than bravery.

Your choices are limited to the Necromancer curses Amplify Damage and Lower Resist, as well as the Paladin aura Conviction.   Your only other option is to steer clear of enemies with immunity.   Modifiers on particular one-of-a-kind items, such as Death’s Web, which lower an enemy’s resistance to a particular kind of damage (for example, “-40–50% to Enemy Poison Resistance”), as well as resistance-lowering skills, such as the Sorceress’ Cold Mastery, do not break immunity.   These properties will, in fact, lower an enemy’s resistance by the stated amount, and in some cases, they are better than pure damage; however, a creature that is immune will continue to be immune to their effects.   As for the curses and aura that were mentioned earlier:

As you can see, there is not much that can be done to deal with magic immunes, but those are primarily restricted to greater mummies.   There are not many options left for the Hammerdin to choose from, with the exception of making do with the damage that their weapon can inflict directly.   To the good fortune of the Hammerdin, immunity to magic is one of the least common types of immunity found in the game.

Amplify Damage is the best option when it comes to breaking through physical resistance.   Another curse unique to Necromancers, Lower Resist has the potential to significantly lower any and all other resistances, making it particularly useful for Poison Necromancers.   Conviction has a range of 13.  3 yards regardless of its sLv, and it does not affect a target’s poison resistance, which is understandable coming from a Paladin.   However, it does a more thorough job of breaking resistances than other abilities.   When it comes to breaking resistances, there are two complications: one of which should be fairly obvious (not everyone will be playing a Necromancer or Paladin), and one of which is more obscure.

To begin, the enigmatic problem.   When a creature is immune to a certain type of damage (meaning that its resistance to the damage in question is 100% or higher), D2R ladder Diablo 2 items receive an additional benefit that is not immediately obvious.   This benefit is that effects that lower resistances have only a 20% chance of being effective when applied to immunities.   If a creature with 120% resistance to fire was subjected to the effects of an sLv1 Conviction aura (-30% resistances), the creature’s fire resistance would not drop to 90% (thereby breaking the immunity), but rather it would drop to 114% and the creature would still be immune to fire.   This penalty remains in place even after a creature’s immunity has been breached; for instance, the monster from the previous example, if Diablo 2 buys Diablo 2 resurrected items were to be hit by an sLv19 Conviction aura (which lowers resistances by -120%), would not drop to 0 fire resistance; rather, it would drop to 96%, meaning that PS D2R ladder items is no longer immune to fire but still has a very high resistance to it.

What good does it do to break a monster’s immunity if buying diablo 2 resurrected items doesn’t change the fact that they are still at least ninety percent resistant to the element they were originally immune to? Now, for the upbeat part of the report: Once the immunity has been broken, other forms of resistance lowering will work at their full potential, despite the fact that Amplify Damage, Lower Resist, and Conviction only work at a 20% effectiveness rate.   If a Necromancer uses Lower Resist on an enemy that is poison immune and breaks their poison immunity, their previously mentioned Death’s Web will grant the full -40 to -50% penalty to enemy poison resistance.   This is a significant effect for a Poison Necromancer, whose high-level Poison Nova can deal 6,000 damage or more with a single cast.   Even one-half of that would be acceptable.   This is also true for a Lightning Sorceress or Javazon who is equipped with Griffon’s Eye, which helps to explain why such Diablo 2 Resurrected Items Xbox One command such a high price.   Unfortunately for the Blizzard Sorceress, foes that are immune to cold tend to have very high cold resistances, which means that cheap Diablo 2 resurrected ladder items will require a significant amount of effort to break most cold immunities.  .  .  which makes sense when you consider that a level 30 skill in Cold Mastery would lower an enemy’s cold resistance by -165%, making it easy to defeat any adversary that was not immune to the effects of cold damage.

The good news is that your character does not have to be a Necromancer or a Paladin.   You are not without choices.   There is a wide selection of loot that, when utilized, lowers resistance or amplifies damage, but the majority of these are classified as being extremely specialized.   In light of this fact, we will now discuss the two most effective strategies for overcoming resistance.

Items with a Lower Resistance

The choice that is by far the simplest is to just go out and purchase a weapon that already has the property “of Lower Resistance,” which will endow it with charges of Lower Resist.   You can simply browse through Akara’s wares until she has one available in stock, and it is usable by any class.   You should be aware that Lower Resist is a level 30 skill; consequently, you probably shouldn’t bother shopping for one until you’ve progressed through some of the more difficult difficulties. This is just as well, as immunities do not become commonplace until Hell difficulty, which is why it is a common rite of passage to shop for a Lower Resist item (typically a wand) as soon as you make it to Hell difficulty.   This is because immunities do not become commonplace until Hell’s difficulty.

Despite this, there are some drawbacks to this.   To begin, the cost of purchasing the wand itself can be quite high, depending on whether or not it comes with any additional skills.   You should budget tens of hundreds of thousands of gold for this endeavor, which, to be fair, really shouldn’t feel like too much of a financial burden at this stage of the game.   Worse, however, are the costs associated with recharging; recharging is extremely pricey, costing on the order of thousands of gold per charge.   Second, the sLv of the Lower Resistance skill will almost certainly be quite low due to the fact that the “of Lower Resistance” modifier will only grant you sLv1 – 3.   Third, you should always keep this item equipped in the alternate weapon slot.   This means that you won’t be able to use other abilities or items, such as the Call to Arms ability.

Conviction through the use of Infinity

Creating an Infinity polearm is an alternative, but it’s a lot more expensive.   For this purpose, any polearm with four sockets is suitable as a base (but not spears!).   and the combination of the runes Ber, Mal, Ber, and Ist.   Because Ber is one of the rarest runes (and consequently, items) in the game, and because this rune word requires two of them, it is inaccessible to all but the richest players.   In spite of this, if you gather the necessary resources, you will be able to acquire a fantastic weapon, which is normally given to a character’s Act 2 Mercenary.

Even though Infinity possesses a great number of useful modifiers, the one that stands out in terms of its ability to break immunities is its level 12 Conviction aura.   This will transform your mercenary into a walking debuffing machine, dealing -with an 85% resistance reduction to all enemies within 13.  3 yards.   This is extremely helpful for almost any elemental build, and it can break some resistances.  .  .  as long as their base resistance is lower than 116%, whatever the case may be.