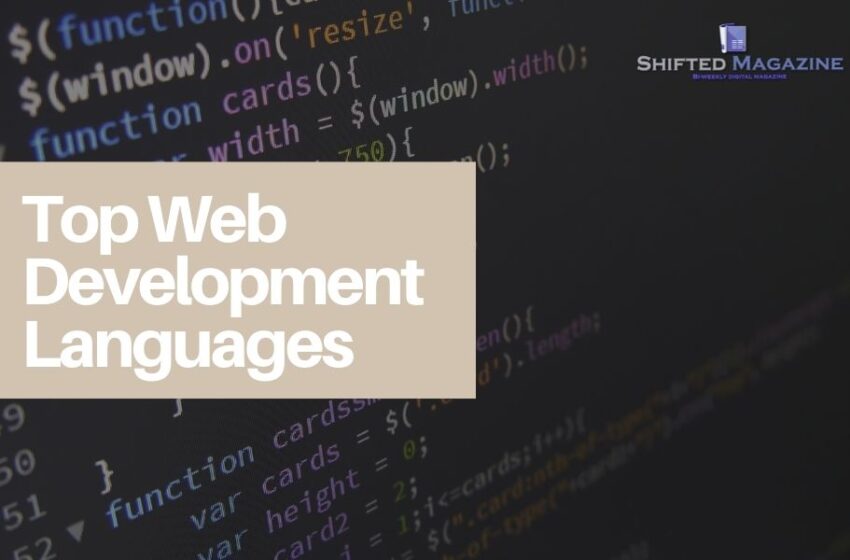 Generally, this language refers to the coding and programming side of website construction as opposed to the web design side. It consists of everything from a simple page of HTML text to complex, feature-rich applications developed to be accessed from various Internet-connected devices.

It’s important to stay up-to-date with which web developer languages you need to know currently; that’s how you find jobs. The most important skill to be learned in today’s world is to know a computer language and how to write a computer program. Today, computers have entered every industry. For example, the autopilot in an aircraft or a digital speedometer in your bike, are all computers that surround us in various forms. Computers are extremely useful for an organization to scale up its current status. Gone are those old days of pen and paper. Today, to store, save and access your information, you are in dire need of computers.

Take a web development course and to stay up-to-date with web developer languages and enrich your career.

There are several programming languages with their specific purpose and contain a single set of keywords and syntax that are used to create instruction manuals. The programming language varies in the level of concept and classified into two categories:

Let’s now take a look at the different types of programming languages:

It provides a set of commands after dividing the program into variables, or functions, statements, and conditional operators. Various Programming editors or IDEs help users compose programming code using one or more programming languages. Some of them are Adobe Dreamweaver, Eclipse or Microsoft visual studio, C, Java, FORTRAN are some examples of Procedural Programming Language.

This programming paradigm is written, based on the objects i.e. it contains data within the form of fields and the code in the form of events. OOPs, offer many features like abstraction, encapsulation, polymorphism, classes, and Objects. Encapsulation is the main rule as it ensures secure code. It also sheds light on code reusability with the concept of inheritance and polymorphism that allows the spreading of current implementations without altering much of the code. Most multi-paradigm languages are OOPs languages such as Java, C++, Python, Javascript, and more.

The programming paradigm is hugely based on formal logic. The language doesn’t tell the machine how to do something but sets restrictions on what it shall consider doing. PROLOG, ASAP, and Datalog are major logic programming languages, rules are composed in the form of classes.

And, here are the most important computer languages, that a programmer must know for web development:

JavaScript started as something of originality—a web programming language that allowed various developers to incorporate better interactivity within their web pages. And while its function remains fundamentally the same, the increased focus on site usability has helped to turn JavaScript into one of the most globally used front-end coding languages. Most sites use JavaScript, and it supports plug-in free on all modern browsers. Developers use JavaScript to mechanize tasks within web pages, add animations, and include interactive qualities that allow for dynamic, reciprocal sites that can change and adapt to user input, without having to reload from the server.

In addition to being important to front-end development, it is also globally used in professional backend for web development that programmers who are trained in JavaScript are usually in high demand. With the help of Node.JS, JavaScript can be put to use for backend development as well.

C# is a programming language that is almost similar to Java, making it an easy option to pick up for those who are already Java know-how. C# is object-specific, which means that it allows developers to define what kinds of operations can be functional to the data structure, making it a useful totaling to a well-rounded developer’s toolbox.

While many web development languages have a dedicated developer community, the Python community is one of its most striking features. The support offered by this community makes it an easily available option for new programmers, and its popularity is on the move.

Python simplifies the coding procedure, offering spontaneous solutions that make it stand out from some of the most complex web languages. Other advantages of Python include its flexibility and the fact that it’s a very effective teaching tool for beginner developers.

Java is another popular choice in big organizations and it has been so for decades. Java is globally used for building enterprise-scale web applications. Java is known to be very stable and so many large enterprises have adopted it. If you are trying to find a development-based job at a large organization, Java is the language that you must learn. Java is also used in Android App Development. Almost any business today needs an Android Application as there are billions of Android users today. This opens up a huge chance for Java developers given the fact that Google has created an excellent Java-based Android development structure, which is – Android Studio.

Golang is a programming language developed by Google and is also known as Go. Go provides excellent support for multi-threading and therefore, it is being used by a lot of companies that depend heavily on distributed systems. Go is very much in use by the startups in Silicon Valley. But, it is yet to be put into use by Indian companies/startups. Those who wish to join a Valley-based startup focusing on core systems should master Golang.

Go, being the more focused language that it is, is tougher to learn, but once you know it you will be in high demand. The developers of Golang created this language loosely based it on the syntax of the C programming language, only after eliminating the irrelevant garbage of languages such as C++.