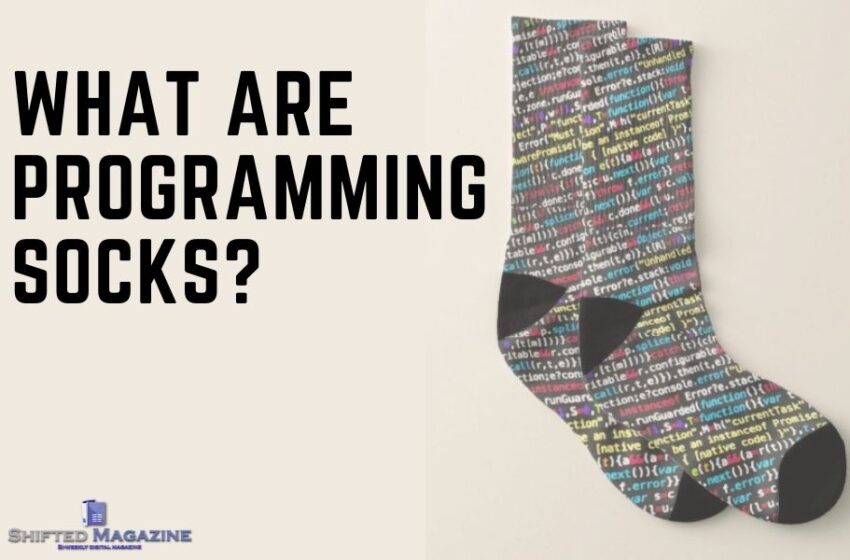 High-end fashion attire has always been the biggest motivation for fashion-freaks whether they belong to this industry or not. As a matter of fact, the human eye gets attracted to multiple colors, spicy patterns, and crisp designs in clothes, shoes, and accessories. Our apparel is of the greatest interest because it features so many items and products including high-waisted jeans, tops, belts, jewelry, socks, and much more. Socks come in a variety of types based on their size, thickness, and dimensions ranging from knee-length socks, and programmer socks to slip-on paddings.

Socks, no matter what type they are, play an important part in maintaining the health and hygiene of our feet. They are designed to protect our feet from the scorching sunlight in the Summer season and cold dry wind in Winters. Socks absorb excess moisture from our feet and keep them dry and soft. Direct contact of bare feet with the sole of shoes might damage the texture of external dermal layers of our feet. Socks create a layer between the two to avoid this abrasion. In winters, socks keep the feet warm and cozy.

This write-up is focused on one of the most important components of men’s and women’s apparel i.e; programming socks and everything you need to know about these special socks.

What socks are programming socks?

A pair of socks that is as high as to cover your thighs would be categorized as programming socks. These are the most significant attire of both women-looking men and cross-dressing men who engage themselves in programming and coding either as a profession or hobby. Such socks feature attractive pastel colors in the form of horizontal stripes contrasting with each other or complementing each other.

Appearing as thigh-high socks that cover more than half of your legs and exhibiting intricate patterns in the form of horizontal stripes featured in alternate colorful bands make a signature pair of programming socks. These socks are available in a variety of colors and designs. Some are horizontally striped while some are not stripped. Some are plain while some of those socks come printed with quotes or floral patterns. Artists design cool and funky color combinations and designs of programming socks that sell exceedingly. They may feature 3D prints, digital prints, cool colors, and crazy patterns.

Where did the idea of Programmer socks come from?

The origin of these socks is not known precisely. However, it is believed that in 2016, a pair of knee-high socks featured on an Ecommerce website called Zanzea was listed under the title of programming socks. The product had a striped appearance and it was baby pink in color. It might be its multiple color variations that linked it to color coding in programming. It could also be a result of various other random reasons. In the long run, we obtained a killing product that was named programming socks exclusively linked to programmers and especially females or shemales who had delicate feminine legs and practiced programming.

How did the programming socks meme begin?

After the first post being produced in 2016, this term went viral in the following years i.e; 2017 and 2018. It was used by social media influencers and bloggers as a meme. They began to post its screenshots in the comment sections of related posts using it for fun. All these factors gave much hype to this trend. Soon, programming socks became a funky symbol for men or transgenders who used to do programming. These posts received immense popularity and retweets on Twitter. After that, they made their way out on Reddit and were marketed like crazy. People started searching for these socks in the Amazon search engine. Owing to the popularity of these socks, terms like programmer socks and programming meme became search keywords that people would use. This is how these socks gained this much popularity.

The usefulness of Computer Programming socks

Programming socks look adorable on your skin as you wear them. They make you look ready and excited about your programming skill. Some people even suggest that such socks must be added to the uniform of programming students in high schools. In this way, they would be more eager and motivated to learn coding, java, and python, etc. Even in winters, these socks can be obtained in warm woolen stuff to keep your legs and feet cozy. These socks are also called coding socks as they come in relevant color tones like neon Green and Black or Pink and Black. In the summer season, one can get one’s hands on an exclusive pair of programming socks made of supreme-quality Nylon, Cotton, or Spandex, or even a blend of them. In this way, programming could be done with more efficiency without suffering from the heat.

A number of examples have gone viral that showed what role a pair of such socks plays when it comes to doing programming. For example; if a person finds it hard to develop a code in programming, he must put on his programming socks instantly. Most of the cases suggest it triggers your brain to work more efficiently and effectively especially when you are a programmer.

Besides using these socks for ourselves, we can choose to give them as a gift to our friends and family who love programming and do it as a hobby or profession. Nothing would amaze a programmer or coder more than a soft pair of programming socks with eye-catching colors and desirable print. Learn more from programming sites.

Who can wear programming socks?

Since these socks are popular around the globe and programmers are also found in every nook and cranny of the world, these are available everywhere. Ecommerce businesses deliver these socks to your doorstep anywhere anytime. They seem to work 100% functional along with the costume of a Japanese schoolgirl and they make guys look identical to that.

Today, not only transgenders or programmers, in fact, everyone loves to wear these super-stylish socks that give a statement look to programmers out there. One of the most popular transgender programmers known as F1NN5TER has inspired thousands of people with her socks and programming skills altogether. She teaches programming on YouTube and possesses a dedicated audience. She also reviews such socks designed by different brands. As a result, many people love to copy her dressing sense and try those socks. Some programmers are interested in practicing programming like her by looking like her while wearing coding socks. They believe that nothing would help them learn and perform programming as effectively as these socks. These socks are considered the rightest fit for programmers and computer coders.