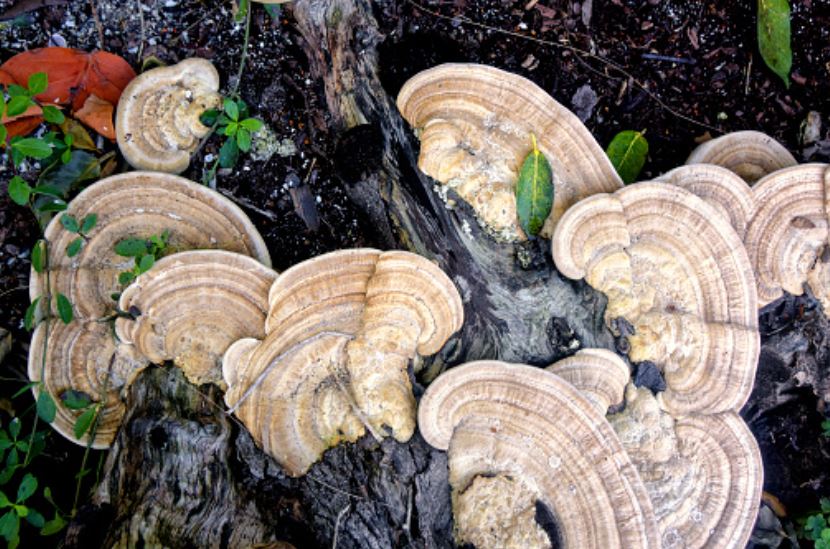 Functional mushrooms are what all health enthusiasts are talking about these days. Touted for boasting therapeutic benefits that extend beyond their nutritional power, functional mushrooms can help you achieve your wellness goals.

There are a variety of fungi that fall into the functional mushroom category. Each possesses its own distinct compounds contributing to a unique range of therapeutic effects. Turkey tail is a highly prized functional mushroom that can support the body in an astounding way.

Humans have eaten turkey tail mushrooms for thousands of years to help manage various conditions. Recently, it’s garnered much attention due to research that suggests it may support immune function and gut health.

But what about turkey tail for dogs and other pets? This article explores the benefits of turkey tail mushrooms for humans and pets.

What Is Turkey Tail Mushroom?

Turkey tail is a species of mushroom that has been used in Eastern medicine and other holistic practices for centuries.

The mushroom’s name mimics its appearance, which resembles the colorful fan of a turkey’s tail feathers. The scientific name for turkey tail is Trametes versicolor, but it’s also sometimes called Coriolus versicolor.

Turkey tail is rich in antioxidants and other beneficial compounds that give it “healing power” status. In many Asian cultures, it symbolizes health, vitality, and longevity. Moreover, it was once used in Traditional Chinese Medicine (TCM) as an immunomodulator to support immune function and help fight infections.

Traditionally, people would brew turkey tail into teas, but turkey tail supplements are more popular today. Though it is possible to eat turkey tail fresh, it’s chewy and tough, so they’re not the most palatable mushroom. Many people prefer using supplements like capsules or powders.

Turkey tail is one of the most well-studied functional mushrooms in the world. However, its effects in humans are better understood than in pets.

Nonetheless, our knowledge about turkey tail, and mushrooms in general, has greatly expanded, allowing us to make informed decisions about whether to include them in our pets’ diets.

Existing research suggests that turkey tail provides many of the same benefits for pets as it does for humans. Granted, more scientific studies are needed on humans and pets since much of the research has been done on animal models or in test tubes. However, research thus far is promising.

The most noticeable difference between using turkey tail for humans versus pets is dosage requirements. Since pets are generally much smaller than us, they typically require a lower dose of turkey tail to achieve similar effects. Size, body weight, and metabolism are all factors that affect the ideal dosage.

Another factor to consider is your reason for using a turkey tail supplement, either for yourself or your pet. There is little research available on optimal doses for specific conditions.

What Are the Benefits of Turkey Tail for Humans and Pets?

Turkey tail is rich in antioxidants, polyphenols, triterpenes, beta-glucans, and prebiotics, all of which contribute to its therapeutic benefits.

Here are the potential benefits of turkey tail mushrooms for humans and pets.

Immune modulators may boost or suppress the immune system, depending on the body’s requirements, thereby fighting off bacteria, viruses, and infections.

In both humans and pets, turkey tail mushrooms can help regulate immunity and maintain homeostasis.

Research suggests that turkey tail’s immune-boosting properties may make it an effective supplement to cancer treatment, including breast cancer.

While there is far less evidence on turkey tail for pets, a 2012 study investigated the effectiveness of PSP extract in treating dogs with hemangiosarcoma. This is an aggressive vascular cancer most commonly found in the spleen.

As part of the study, 15 dogs from a teaching veterinary hospital were administered 25, 50, or 100 milligrams of PSP extract per kilogram of body weight per day. Dogs in the high-dose group demonstrated delayed disease progression and increased survival time.

Turkey tail mushrooms may help support digestion and gut health in humans and pets. The mushroom is a healthy prebiotic; prebiotics provide probiotics (the good bacteria in your gut) with the nourishment it needs to flourish and grow.

This is important because a healthy gut minimizes the risk of digestive inflammation and improves immune function and overall health and vitality.

Both humans and our pets are exposed to free radicals every day. They are caused by metabolic processes in the body like aging and external factors such as air pollution, cigarette smoke, stress, and sun rays. Free radicals cause oxidative stress, speeding up the aging process and leading to various health conditions.

Antioxidants help neutralize or eliminate free radicals at the cellular level, thereby protecting the body against the detrimental effects of oxidative stress.

Turkey tail is rich in antioxidants, including phenols and flavonoids, which may help reduce oxidative stress and cell damage in the body. Studies report that the mushroom contains 35 different phenolic compounds.

Turkey tail mushrooms provide mostly the same benefits for humans and pets. It’s perhaps most well-known for its immune-boosting properties and is excellent for boosting general health and wellness.

However, other potential benefits include supporting a healthy gut, combating free radicals, and aiding cancer treatments.

Whether you’re buying turkey tail supplements for you or your pet, choosing a reputable brand with high-quality products for optimal results is important.