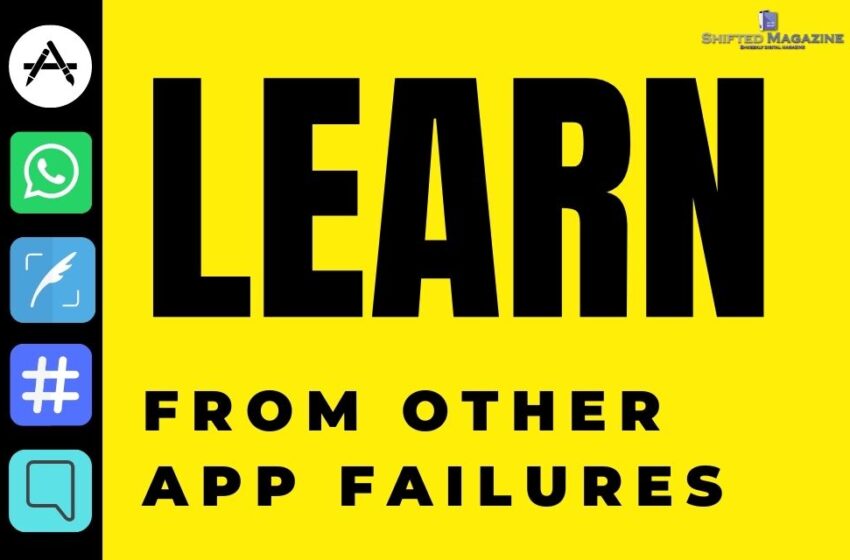 Although a company can pour a tremendous amount of time into designing, building, and maintaining a mobile application, it can fail despite all best efforts. There are numerous reasons why an app fails, from things that the ownership team can fix to aspects that are out of their control. But other companies can learn from these failures and improve either their current app or the app they are in the process of creating. In the following sections, we list common app mistakes as well as examples of large app failures.

When a team first brainstorms an idea for a new mobile application, it can be easy to accidentally skip steps or become hyper-focused on just one aspect of the app once it’s launched. However, teams need to remember that there are lots of apps out there vying for people’s attention, and in order to stay relevant, they have to work extremely hard. Here are some of the most common new app mistakes:

Delivering the best user experience possible is one of the leading ways to ensure an app will be used regularly by its target audience. However, when problems do occur, a plan needs to be in place. Ignoring security concerns, as Facebook did in 2018, or not supporting the employees, like Doordash, will lead to a bad reputation. App developers need to avoid such problems or have a plan in place to fix them.

Examples of App Failures and What to Learn from Them

Here are four examples to learn from when it comes to apps. These were once popular apps amongst users that eventually closed down for seen and unseen reasons. But with each mistake is a learning experience for another app.

This texting app hit the market in 2013 and was immediately popular with teenagers and young adults. It allowed users to send messages, or Yaks, to each other. In addition, certain posts could be viewed by the whole community and assigned a score that was boosted by users. What led to the demise of this app was cyberbullying, and developers launching solutions that were optional for users. These issues caused relentless bad press for Yik Yak and its founders, and it was ultimately shut down.

There are two key takeaways from this app’s failure. You need to know your audience. If the Yik Yak team had done that, they would’ve known that bullying could become an issue and come up with a solution before it became a bigger problem. Another lesson is to plan for something to always go wrong. Find every loophole possible or conduct multiple tests. That way if a problem or issue pops up, it can immediately be addressed.

Hailo, the first mobile cab-hailing app was launched in 2013. The users of this particular app would summon a cab rather than having to step out in the street to hail one. Although this service was popular in London, the app developers failed to realize the market differences between that city and New York. Also, there were multiple competitors popping up at the same time.

A lesson to be learned from Hailo is that you need to conduct market research. Flag any and all diversifying factors while assuming that one set of market research data can be transferred to another area. In the instance of Hailo, the cab drivers themselves were different in the two locations. While London drivers needed to have good knowledge of the city and were already equipped with smartphones, the same could not be said for New York cab drivers.

Another note is to understand that there will be competitors. When Hailo launched, it had little to no competition, but with the launch of Uber, they were quickly overtaken. App owners should always be prepared to play offense, competitors can strike from anywhere hard and fast, and it’s good due diligence to be prepared for anything.

First available in 2012, Vine was a video platform that specialized in short loopable videos. Shortly after launching it was acquired by Twitter to become a video alternative to its short-form text social platform. But after the ownership switch, Twitter failed to integrate the app eventually led to its demise.

Three key takeaways from this app failure are: investing in research and development, having a monetization plan, and creating a clear business path. When a smaller company’s app is bought out by a larger organization, the new owners need to understand the end-user and their needs. Investing time to research this new audience will help in the long run.

Another fail when it came to Vine was Twitter’s failure to monetize the platform. Finding opportunities for strategic partnerships or advertising avenues will help keep it relevant in the market and for its upkeep. Finally, as mentioned in other examples, having clear business plans ensures a company knows what the app is meant to achieve and is able to prevent self-annihilation, as Twitter did by launching it’s own video service after buying Vine.

Created in 2010, Radio was one of the first music streaming apps. However, instead of focusing on gaining new users, the team behind it was more interested in developing the perfect music streaming app. There was no marketing team in place to build out the number of users which eventually led to Rdio’s demise.

What other companies can learn from this particular failure is needing to find a balance between app research and development and the need to market it to investors and users. In the building phase, companies need to think about scaling and when it will happen to prevent burnout.

Mobile application development takes a lot of time and effort. From its conception to daily maintenance, it’s a long road to keep an app up and running. For a variety of reasons, some of them will fail. However, businesses can learn from these examples and implement them into their app development to drive success.